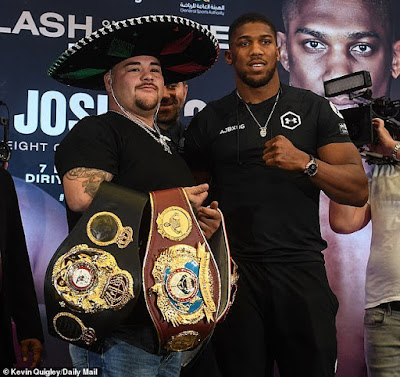 Former Heavyweight champion of the World, Anthony Joshua has made a rather erratic statement about what he expects from fans after he fights Andy Ruiz this December in Riyadh, Saudi Arabia.

Mexican-American, Ruiz, shocked the boxing world when he beat Joshua in 7 rounds in New York’s Madison Square Garden in June, but Joshua believes he will be adored this time around if he regains the 3 heavyweight belts on the line. ‘I’m fighting the best man in the world now.
I’m going to whup him, and show how great I am,’ Joshua told Sky Sports. They think he’s so great, so when I beat him I want everybody to bow to my feet and tell me how great I am.
‘I couldn’t beat Ruiz Jr before and get the credit I deserved. You saw me in the ring [before the fight] – I wasn’t fighting King Kong, was I? I didn’t have that mindset.
Apparently I’m fighting the quickest hands and the best fighter in the division.
So once I beat him I want everybody to bow to me.’ Joshua’s fight with Ruiz tagged ‘clash of the dunes’ is being sponsored by the Saudi Arabian government with reports circulating that about $40m has been budgeted for the fight which is to be shared between both boxers and their promoters.