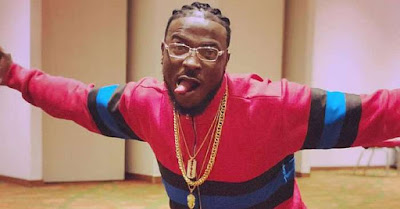 Dammy Krane says Africa should be the goal of African artists and Peruzzi says you can succeed anywhere in the world.
Yesterday, Nigerian superstar, Burna Boy warned Nigerian artists on the perils of international record deals and thanked his mum/manager, Bose Ogulu for helping him get a great deal with Atlantic Records.
Earlier today, another Nigerian artist and Hypertek Digital signee, Dammy Krane has also lent his two cents to the matter. He took to his Instagram stories to write the following,
See post below:- 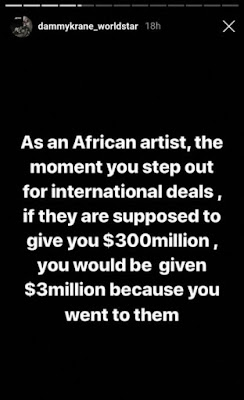 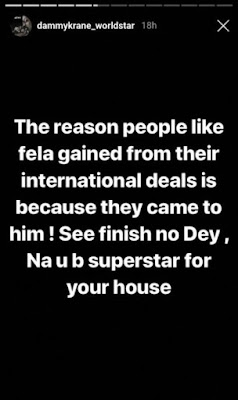 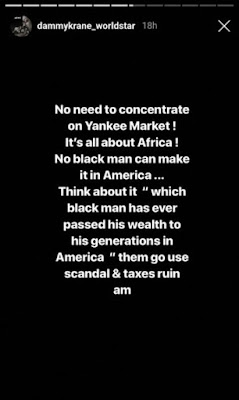 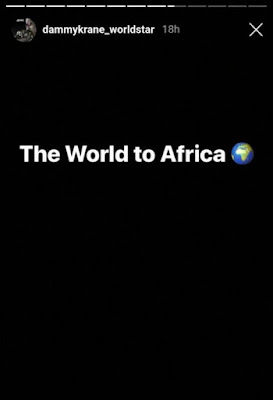 “As an African artist, the moment you step out for international deals, if you were supposed to give you $300million, you would be given $3 million because you went to them.
“The reason why people like Fela gained from their international deal is because they came to him! See finish nor dey, na you be superstar for your house. Going to make deals with them in the (United) states only shows you want something from them.
“They would sell you cheap. Nobody sabi you as superstar for yankee. You go gats live your lavish lifestyles to be noticed. Meanwhile these labels know Africans have massive numbers worldwide. That’s what they’re looking for.
“No need to concentrate on yankee market! It’s all about Africa! No black man can make it in America… Think about it; Which black man has ever passed his wealth to his generations in America? Them go use scandal and tax to ruin am. The world to Africa.” 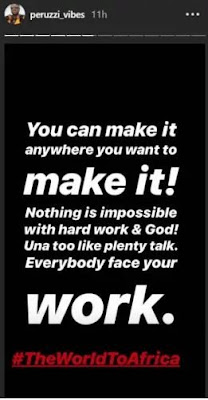 DMW artiste; Peruzzi took to his Instagram stories to respond. He says,

“You can make it anywhere you want to make it! Nothing is impossible with hard work and God! Una too like plenty talk everybody face your work.”