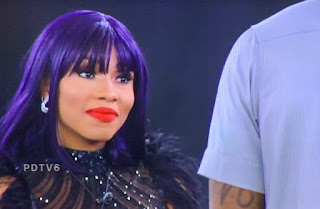 – BBNaija housemate, Mercy, has clocked a year older on September 29, 2019
– Nigerians have taken to social media to celebrate the housemate with lovely messages as some people even got cakes
– This is coming shortly after she narrowly escaped eviction from the show due to her fight with another housemate, Tacha
The BBNaija Pepper Dem 2019 season has no doubt been an intense one seeing as twist and turns were introduced to the show and unexpected things happened.
Despite that, it is a time of celebration for one of the housemates, Mercy, as she clocked 26 on September 29, 2019.
Mercy is undoubtedly one of the top contenders on the show and her die-hard fans have taken to social media to celebrate her birthday in their own way.
Some Nigerians bought birthday cakes to mark the occasion as others made a toast to her at clubs around the country. Some other fans also took to social media to share celebratory messages.