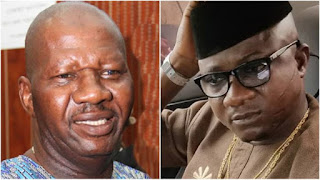 Olaniyi Afonja, who is fondly referred to as Sanyeri has praised Baba Suwe for paving the way for other Yoruba comic actors.
Sanyeri, in an Instagram post, called Baba Suwe a mentor, whose works shaped his professional life into a profitable skill.

“I want to use this medium to appreciate Chief Babatunde Omidina A.k.A BABASUWE…You have helped us shape our professional life into profitable skills,”

“You are an amazing mentor, I appreciate your contribution towards the society. Also praying for the grace to have positive effects unto our growing society.”

Sanyeri became popular after featuring in a 2010 movie, ‘Opa Kan’ alongside Odunlade Adekola. He cemented his popularity after playing the role of Sanyeri in a comedy that starred his friend and colleague, Adekola Tijani aka Kamilu Kompo. 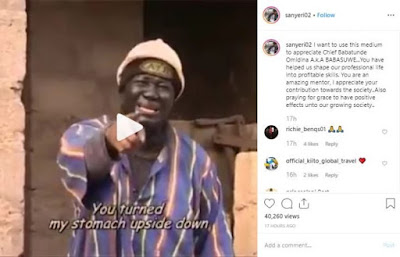