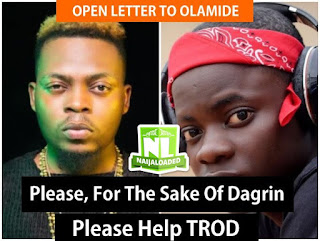 It’s 9 Years since we lost Dagrin and while putting up some random posts on Naijaloaded to celebrate him yesterday, I thought it would be wise to seek Olamide‘s favor on behalf of TROD.
From my vast experience about the Industry, Olamide is the most caring person anyone could find in the Nigeria music industry full of greedy and selfish people.
You can’t have Olamide beside you and lose at all, you will always emerge a Winner and become great. No need to debate on this but if you want, let me quickly take you through some Artistes who have enjoyed from Olamide’s goodwill.
Zlatan is a perfect example, he blew up massively after his song “Oh My Lord” with Olamide was released.
CDQ also tapped from his Goodwill ever since he featured him in his Song “Indomie” and has remained blessed ever since.
Danny S song “Ege” became an instant hit after Olamide danced to the song and shared it online.
Barry J became an household name after Olamide started posting him on his Instagram page and started dancing to his Jam.
Bella Shmurda is enjoying massive attention after Olamide posted a Video of them working in the Studio together.
Olamide gave Lyta, Picazo, Yomi Blaze and Fireboy platform that will forever help their music career in this tightly competitive music industry.
Other Top acts like Lil Kesh, Adekunle Gold, Phyno etc also enjoyed from Olamide‘s good will. You can even check out the post below so you can understand better.
With all these being said, I believe you all would agree with me that Olamide is the nicest person you can find in the Naija Music industry of today.
Regarding TROD‘s matter, I just believe the time might not be right yet for them to work together but as we celebrate Dagrin today, we thought it would be cool to beg Baddo to help us show Dagrin‘s brother TROD who took his path some love so he can be useful for himself and his family at large.
Olamide, please help us show TROD Love!!

Guys, Do You Think TROD & Baddo Will Make A Hit Jam?

Let’s hear from you all.
Drop your comments.