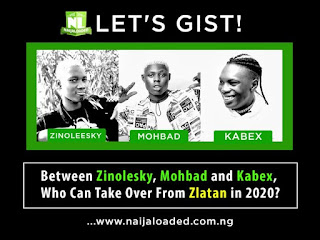 Hello Guys!
So far this year, the street has discovered some talented and creatives act who have been dropping dope freestyles and singles consistently.
Currently, the upcoming act like Zinolesky, Mohbad, and Kabex have been oustanding with freestyles and sigles that has really gained them some fanbase.
If you recollect by this time last year Zlatan has been dishing out singles to relegate the Otumba Lamba by creating his own dance step Zanku which was accepted by the street and outshined Shaku Shaku.
When you are talking about the No1 Street Act this year Zlatan is no doubt the street’s favorite. He has successful cemented his brand in the heart of his fans both home and abroad with various hit singles and also the most featured artist this year. Ayi!!!
But as the saying goes “You Can’t Blow Forever“
Yes, we all know Zlatan can’t be the King of the Street Forever but who can take over from him.
That’s the main aim of the post and i will like you guys to sir your opinion about the above listed acts or suggest yours.

Between Zinolesky, Mohbad and Kabex, Who I Can Take Over From Zlatan in 2020?