Kizz Daniel has urged the female singers in the music industry to jump on his currently trending “Fvck You” challenge.
Since Kizz Daniel released his latest trending jam; “Fvck You,” the song has been doing wonders on social media as the song has been the centre of discussion among music lovers on the internet. Just barely days after the song got released, after seeing various reactions from fans that posit that they are in love with the song, Vado kick-started a challenge for the song with the hashtag “fvck You” #fvck you. But the challenge came in another level as it came for the other music artistes in the industry.
Various music artistes such as Lil Kesh, Skiibi, Chinko Ekun and a lot more have done their own challenge of the song. But since the challenge has been on, there hasn’t been any from the female singers in the industry. This has however, made Kizz Daniel to challenge the ladies as well to get on the “Fvck You” trend to see what they’ve got in store. He wrote; “I want to hear the ladies side of the story #fvckyouchallenge . it’s not just a challenge anymore , it’s a total experience.” 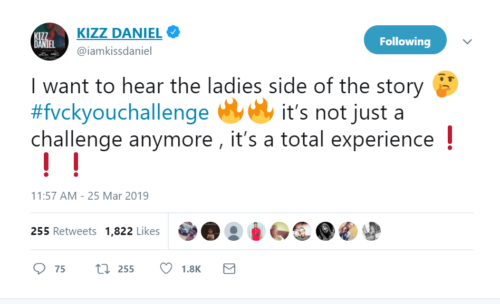 Tiwa Savage today becomes the first female to drop her own challenge after Vado’s request and we definitely hope to see more.