HEADIES NEXT RATED!! Rema, Joe Boy, Fire Boy, Lyta, Zlatan, And Victor AD – Who Do You Think Deserve It More?? 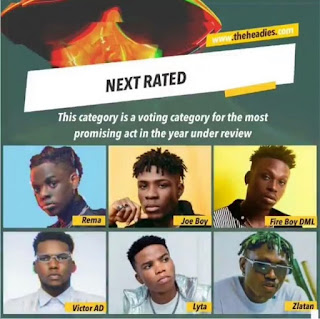 The Headies Award for Next Rated is an award sponsored at The Headies, a tradition that was established in 2006 and independently called the Hip Hop World Awards.
Headies recently released the list of this year’s next rated which featured Rema, Joe Boy, Fire Boy, Lyta, Zlatan, and Victor AD.
Without doubt, all the artists in the aforementioned list merit the award but the question is

Which Of These Artists Do You Think Deserve it More??