UPCOMING ARTISTES!! 6 Things You Should Do Instead Of Committing Suicide Because You ‘Never’ Blow 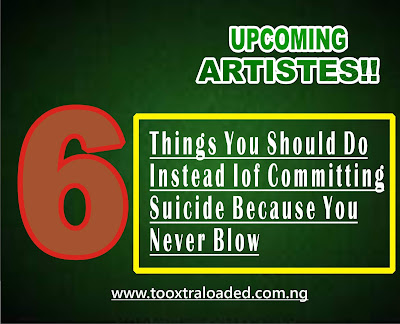 Hi Guys!!
This weekend got me thinking of upcoming artistes having suicide thoughts and the ones that have committed the actual suicide
The news of Olanrewaju Pelepele Makanaki, a former YBNL act who died after committing suicide came as a big shock.
In case you missed the news READ HERE
Dear upcoming artistes, when your career journey seem to be demanding suicide, that is clearly a time to check your premises and check yourself.
Killing yourself would be the dumbest thing you can do. What if your time to blow is near?
What if there are better things coming your way that is not even music?
As an upcoming artiste, below are 5 things you should consider instead of killing yourself because you are not blown yet:-

1. Don’t Be An Ingrate, Thank God For Life

If you think because you are not blown yet, God doesn’t have plans for you, you lie!!
Come to think of it, you are waking up every morning full of strength to go about your daily activities, you get inspiration to do songs, you pay producer and promote your songs in the little way you can.
Where do you think the grace to do all these things are coming from?
Oh! from God abi?? and you cannot trust the process and trust God to turn things around for you? issokay!!
My brother, it’s better you think twice before you commit suicide because if you do, we (Naijaloaded) will post it and after posting, people will talk, your name will blow, your pictures will be everywhere.
But what’s the point when you’re already inside grave receiving punishment from God for taking your own life?

2. Think About The A-List Acts Who Came From Zero To Hero

Remember that every blown artiste you know today were at some point an upcoming artiste.
Wizkid was once a studio rat in Murdock studios in Ojuelegba, nobody knew him then but see Wizkid today, now a Starboy.
You all know the story of Patoranking, the gala seller in traffic who is now a music star.
Don’t let me even talk about Olamide, the unknown rapper in the hood of Bariga who is now living his big dreams in the music industry.
Ask any celebrity artiste you see today, most of them went through something worse than what you are experiencing now. If they had committed suicide, wetin for be their gain?
Meanwhile, you all should know that getting to blow as an artiste is not as hard as staying blown.
What if all you are going through now as an upcoming artiste is to prepare you for a longer stay on top in the music industry?
Think about it!!

3. The Little Fan Base You Have On Social Media Is A Sign That You Are Growing

Social media has made it easy for upcoming artistes now to make their voice heard unlike years back when upcoming artiste can only blow through lots of radio airplays.
As long as you’ve got people following you on social media, liking your music posts and dropping some positive comments about your music, it means you are growing.
The few people who love your music craft will spread your gospel.
Look at young singer, Zinoleesky, he was doing what rappers are doing on Instagram till he became widely known in the industry.
Appreciate the little fanbase you have, every big things started small.

4. Life Is Not About Music Alone, Checkout Forbes List And The Black People Doing Wonders On The List

We all know Wizkid, Davido and some other Nigerian artistes are not on Forbes list of the Richest in Africa now.
There are people making billions of dollars from their businesses within Africa.
For God sake, life is not by music alone, if you think music is not your thing after spending up to 4-5 years, you can as well switch to other businesses.
This is the bitter truth Feel free to switch to other businesses you think you can fit into. Afterall, you are pursuing music for the fame, money and good life.
If you do other businesses and you make cool money, fame and every other thing can follow.
Infact, you can use money you made from other businesses to invest in music and succeed easily.

5. Not Everybody Will Be Big To The Level Of Wizkid And Davido

Now, let me say this point blank. No be everybody go blow.
In a university class of 40 students, you can have just 10 first class students, 20 third class and two second class, does it mean, the third class students should go and kill themselves?
No be everybody go blow like Davido and Wizkid, there will always be A-list, B,C,D up to G list in Nigeria’s music industry, just pray for grace and preserve your life so that when you time reach, you’re not in the grave.
Just because you are unknown now, does not mean the world won’t celebrate you.
Take a look at Zlatan na!!
Two, three, four years ago, Zlatan wouldn’t have thought he will be blown to the level of rolling with Davido, Burna Boy and other big artistes in the industry.
If he had killed himself two years ago, would he have achieved all he has achieved today inside grave?
You don’t know how close you are to your dream, don’t go and die, keep moving.

6. If You Ever Think Of Suicide, Just Do A Song On It, Don’t Kill Yourself

Music is a thing of the heart, if you ever had a suicidal thoughts as an upcoming artiste, put all your thoughts in a song and create a strategic promo around it.
Sincerely, many people will be interested in your case and will want to listen to your song.
Fast-rising act, Jaido P did this when he had suicidal thoughts and since then his career has witnessed growth. He released a song titled “Grace” to pour out his suicidal thoughts.
You all remember Skiibii, what comes to your mind when you hear that name? Of course, it should be the death stunt he pulled some years back and you would agree with me that his career got a significant boost from that.
Daz how stars do! they turn their weakness to strength and turn their threat to opportunity.
The End!!

Have You Ever Thought Of Suicide Before As An Upcoming Artiste? If Yes, Tell Us How You Handled It?

What Else Do You Think Upcoming Artistes Should Do Instead Of Suicide?