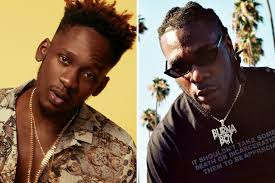 Last night, Burna Boy continued his rich vein of form with him winning the BET international act award over AKA, Giggs and his fellow compatriot, Mr Eazi.
However, is Burna Boy a deserving winner? Maybe not.
While Burna Boy had a splendid year filled with hit records ,Mr Eazi too didn’t do bad. His album, Lagos To London was the most streamed Nigerian album last year further making him the second most streamed African artiste on Spotify next to Wizkid and alongside Burna Boy, he also performed at The Coachella.
With hits like Miss You Bad, Dabebi, Surrender, Suffer Head, Mr Eazi had hits from the album.
So what particular edge does Burna Boy possess in knocking out Mr Eazi to win this award? Maybe none?
So can we say Mr Eazi is a deserving winner or Burna Boy truly earned it.
So Guys

But Did Burna Boy Deserve The BET Award Over Mr Eazi?

Let’s hear from you guys…