LET’s DISCUSS!! Lyta vs Fireboy – Who Is A Bigger Act Right Now? 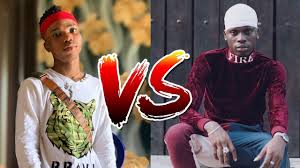 Hello Everyone,
Hope everyone had a wonderful weekend!!
At this point, it is necessary to give kudos to YBNL for the big influence the label already has in the music industry.
Talking about labels that is capable of making an unknown artiste a star in Nigeria, YBNL will be in top 3 because the label has been instrumental to the growth of many artistes in the industry at the moment including Lyta and Fireboy.

After 2 tracks “Time” and “Selfmade” under YBNL, we cannot but admit that Lyta had a successful career journey with YBNL irrespective of the circumstances that led to his exit from the label.
Things get bigger and better for the young artiste after releasing “Monalisa” and the remix with Davido few weeks ago.
In a recent Davido‘s interview that surfaced online, he revealed that he actually jumped on Lyta’s “Monalisa Remix” because he felt the need to help him after watching the touching viral interview he had on Naijaloaded TV.
Obviously, Lyta’s collaboration with Davido on “Monalisa Remix” gave him a huge platform to grow bigger as an artiste.

YBNL shifted attention from Lyta to Fireboy and now Fireboy who has been underground in YBNL ever since has now grown to become one of the youngest successful artistes in the industry at the moment.
His song “Jealous” got massive financial backings as YBNL obviously spent a whole lot for promotion to get song up the radar.
After “What If I Say” and his other releases, Fireboy is now at this point ahead of some artistes he met in the game.
Going by some Olamide‘s posts on Instagram while promoting Fireboy, it is noticeable that his aim is to grow Fireboy far ahead of Lyta to prove some points.
Guys, let’s be sincere

Is Fireboy Now Bigger Than Lyta?

Between Lyta and Fireboy, Who Do You Think Is A Bigger Artiste Right Now?