Between Plantashun Boiz, Styl Plus And Psquare, Which Is The Best Ever Musical Group? 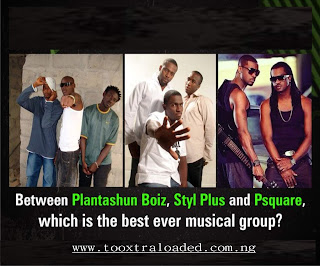 Musical group in the past used to be a thing. Ten years ago, we had foreign groups like Boys II Men, Black Eyed Peas and West Life ruling the international scene with their pop filled and soul hits.

Then, Plantashun Boiz came on to the scene. Comprising the talented Blackface, the witty Faze and a 2face who had a knack for dropping soulful choruses.
For the brief time they were together, they had a stronghold on the music scene with their songs. Knock Me Off, Don’t You Know, If life were easily favorites then in the early 2000s
Then Styl Plus also arrived. Still held on the pillars of a pop banger and love-themed music, Styl Plus rose to prominence quickly with their evergreen hits. Olufunmi, Imagine That are all songs you’ll listen to and would draw a tear to you. One of the best to ever exist.
Between the time Styl Plus were reigning, Psquare emerged in 2005 with their Afrobeat inclined music and also attracted listeners with their dance styles and video albums.
Projects like Game Over and Get Squared were one of the best ever albums then. You can’t lie songs like Bizzy body, Oga Police, Temptation were not hit.
It will forever be a hot debate on which group we miss the most in terms of hits, their acts and the individuals in the groups.
So Guys

In Your Own Opinion, Who Do You Regard As The Best Ever Nigerian Musical Group?

Let’s hear from you too.
Drop your comments…